As a response to my lastest article about Streaming audio with MPD and Icecast2 on Raspberry Pi, I was asked for some ideas about live streaming. I took the chance to plug in an usb audio device with microphone to RasPi and tried to get it working.

Update (2012/08/11): Added a step to update package version number and added "devscripts" to the list of suggested packages .

What you need to have

The default darkice package comes without mp3 support. Since mp3 is the most widespread codec, I decided to build my own package of darkice with mp3 support.

Add a deb-src repository to your sources list at /etc/apt/sources.list:

To fullfill the build dependencies, you have to install some additional packages:

(Not sure if you need all these packages. But it won't hurt.)

Get the source package of darkice:

Please consider to download the rules file from here instead of copy&paste the lines above. The build will fail if line beginnings contains spaces instead of tabs.

Before you start to build the package, change the version of the package to reflect mp3 support. debchange will ask you to add some comments to the changelog.

Build and install the darkice package:

Now you have installed DarkIce with mp3 support.

Add a configuration by copying the template file:

Here's an example configuration to have:

This is just an example and neither optimized nor secure! Learn more about darkice in the documentation section below /usr/share/doc/darkice/. The configuration options are explained in the manpage:

This particular input device is the microphone of a Logitech H270 webcam. It can be addressed using hw:1,0 (Card 1, Subdevice 0).

Keep in mind that Raspberry Pi has no input audio devices on board. You have to plug additional soundcard hardware to usb.

If you don't have an icecast2 server running somewhere, you could set one up on RasPi.

The package manager will ask you to configure Icecast2. You should do so and set a hostname and passwords for source, relay and administration. Needless to say to use strong passwords. The source password will be needed in the darkice.cfg configuration. (See SOURCE_PASSWORD in the above example)

When you run into the following "sink error" message, check if icecast is running and passwords are matching:

Now grab your favorite instrument and start a live jam. To listen to it, open your browser, navigate to the Raspberry Pi host at http://your.raspberry.hostname:8000/raspi and hook up into the stream with your favorite player. 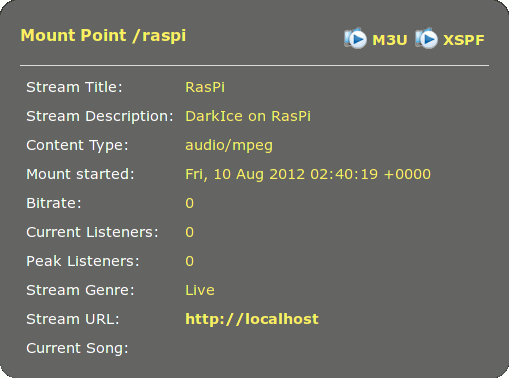 I have done some very basic measurements. With the above configurations, the CPU load is about 50%. Very nice!

Did this article help you? Spread the word!

Thanks to Patrick Adams for inspiration. Looking forward for a turntable session to listen to ;-)