Legacy article about getting the Cirrus Logic Audio Card up and running with Debian Jessie.

[UPDATE 2017/12/21] The driver for the Cirrus Logic Audio Card left its experimental state and the card is easily usable in production.

HiassofT provides an up-to-date howto. Details can be found in the element14 forum.

[UPDATE 2015/09/01] Updated installation instructions for the devicetree drivers. Thanks to HiassofT.

Credits go the the brave authors and contributors who shared their knowledge and code.

The Cirrus Logic Audio Card is a high quality sound card (24-bit, 192kHz) and comes with analogue line-in/-out, SPDIF in/out and an onboard stereo microphone. It connects to the 40-pin GPIO of the Raspberry Pi 2. 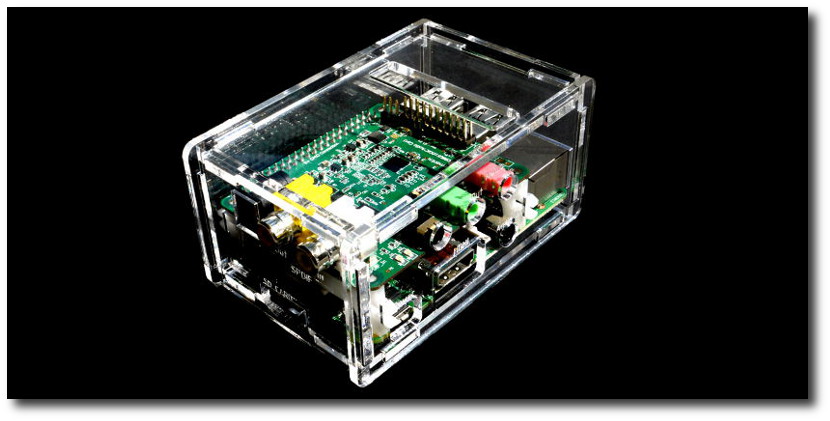 More details can be found in the official manual and the specs datasheets.

But it doesn’t fit into my case…

Since RPi 2 has the same form factor as RPi B+, the case from Built-to-Spec fits. The PCB clips are a bit brittle, be careful when snapping them onto the Raspberry Pi.

And then it says: no soundcards found…

You plugged everything in and together, installed a raspbian image to your sd card, but…

or anything but the cirrus soundcard:

As stated before, the card does not run out of the box on a Raspberry Pi 2. You have to build custom kernel modules and add the driver to the device tree.

One of the benefits of Raspberry Pi 2 is, that it comes with an ARMv7 processor architecture. ARMv7 is widely supported by linux distributions and it doesn’t require prebuilt Raspbian packages. For Debian, the port of your choice is called armhf (arm hardfloat port) often refered to as “EABI hard-float ABI”.

Sjoerd Simons from Collabora provides prebuild Debian Jessie images for Raspberry Pi 2. The documentation can be found in a blog post.

However, I did not manage to boot a custom kernel with Cirrus support on that image. Therefore I suggest to install the official Raspbian image first and then upgrade to Jessie by following the upgrade instruction in the Jessie release notes.

If you feel unfamiliar with the following steps, please follow the upgrade instructions mentioned above. This section comes with no warranty:

Building and installing the drivers for the Cirrus Logic Audio Card

Now to the nasty part. The kernel module from Cirrus has not made it into the official kernel repository. You have to build it by yourself. The fork from HiassofT is currently the most active and recent one. The following instructions are based on a forum post on element14 by HiassofT:

Now press [CTRL a] + d to quit your console session and let your Raspberry work hard in the background. After half a day, get back to your session and install the build:

Add the following lines to /boot/config.txt

And add the following lines to /etc/modprobe.d/cirrus.conf

Protect your kernel from being overridden by upgrades of the the bootloader packages when running apt-get upgrade:

Login, open a terminal and execute the following command:

Then create a mixer setup. Cirrus provides some convenience scripts to preconfigure mixer settings. You can download the scripts from the CirrusLogic repository.

After unpacking, activate the line-out channel by executing:

Connect your stereo to the green audio jack and start your favorite music player.

Way too complicated. Anything more easy?

Go and kick Cirrus to provide bug free drivers for their audio card through the official raspberry kernel. It’s a shame they announce compatibility with Raspberry Pi 2 but don’t provide drivers for anyone except experienced kernel hackers. Their prebuild system image is not an option, because it probably breaks on upgrades.

There are some Debian packages to install a pre-build kernel + modules by autostatic. However there’s neither a build provided for Debian Jessie nor some source packages available. Not sure if you receive kernel updates through this repo at all… (I found that in the middle of an element14 forum post)

If you sell hardware for Raspberry Pi, …